‘You should be’: Cops tell Black lieutenant who’s ‘afraid’ as they hold him at gunpoint, pepper-spray him 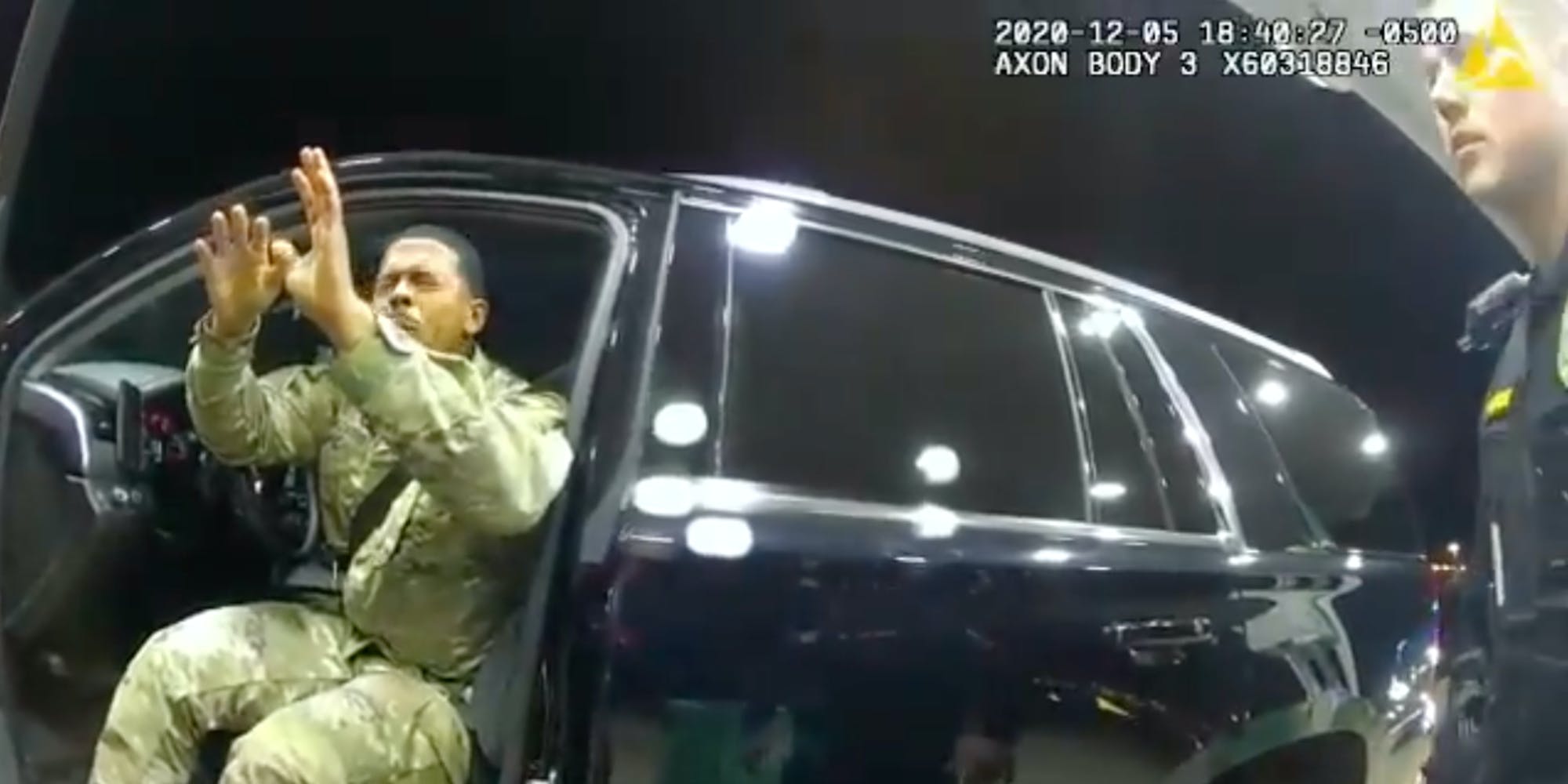 Two police officers held a second lieutenant in the U.S. Army Medical Corps at gunpoint and pepper-sprayed him during a traffic stop in Windsor, Virginia. When he told them he was “afraid” to get out of his vehicle, one of the officers replied, “Yeah, you should be.”

Lieutenant Caron Nazario, who is Black and Latino, was pulled over by Officers Joe Gutierrez and Daniel Crocker with the Windsor Police Department for driving without a rear license plate, according to TMZ. The Chevy Tahoe was reportedly new, and a temporary plate was taped to the rear window. He reportedly pulled into a well-lit gas station to pull over after the police initiated the stop. Because of his tinted windows, apparent missing license, and the fact that he drove for a bit before stopping, the officers allegedly treated the stop as a “felony traffic stop.”

One of the officers, whose body camera footage the now-viral video was extracted from, repeatedly screams at Nazario to “get out of the car.” Both of the officers involved have their guns drawn on him.

“I’m honestly afraid to get out,” Nazario, who is in full uniform, tells them.

“Yeah, you should be,” the officer yells in response.

The officer then pepper-sprays Nazario—four times, according to TMZ. Nazario has his hands up during the whole encounter.

He then gets out of the vehicle, is placed on the ground, and is detained. “Why am I being treated like this,” he asks them.

“This is f*cked up; this is f*cked up,” Nazario, who, according to Vice, also filmed a video of the incident via a cellphone placed on his dashboard, repeats.

At this point, Nazario is sobbing.

Nazario reportedly alleged that the officers told him they’d hit him with charges of obstruction of justice, eluding police, and assault on a cop if he complained about the incident. Those charges, as Vice pointed out, have the potential to be military career-ending.

Watch how these American cops treat this black active duty soldier. “I’m afraid to get out.” Police officer: “Yeah, you should be.” from PublicFreakout

Black Army officer held at gunpoint in his car: “I’m honestly afraid to get out.”

Cops then pepper sprayed, beat, & handcuffed Army LT Caron Nazario was while in uniform… then let him go😐

According to TMZ, Nazario’s dog was in the backseat and suffered from the pepper spray.

While the incident occurred on Dec. 5, the bodycam footage was just released, prompting both Nazario and Windsor to become trending topics throughout much of Saturday. Nazario, who reportedly believes he was racially profiled, filed a lawsuit against Gutierrez and Crocker on April 2, according to multiple reports. He alleges his First and Fourth Amendment rights were violated.

An attorney for Nazario, Jonathan Arthur, said, per Vice, that one of the goals of the lawsuit is to send a message to police officers “that this type of behavior will not be tolerated.”

The Daily Dot has reached out to to the town of Windsor.

The post ‘You should be’: Cops tell Black lieutenant who’s ‘afraid’ as they hold him at gunpoint, pepper-spray him appeared first on The Daily Dot.

2021-04-13
Previous Post: Matt Gaetz reportedly used Venmo to pay for young women
Next Post: ‘Why would DeSantis do this?’ Michigan Gov. Whitmer calls for 2 weeks of voluntary shutdowns & restrictions