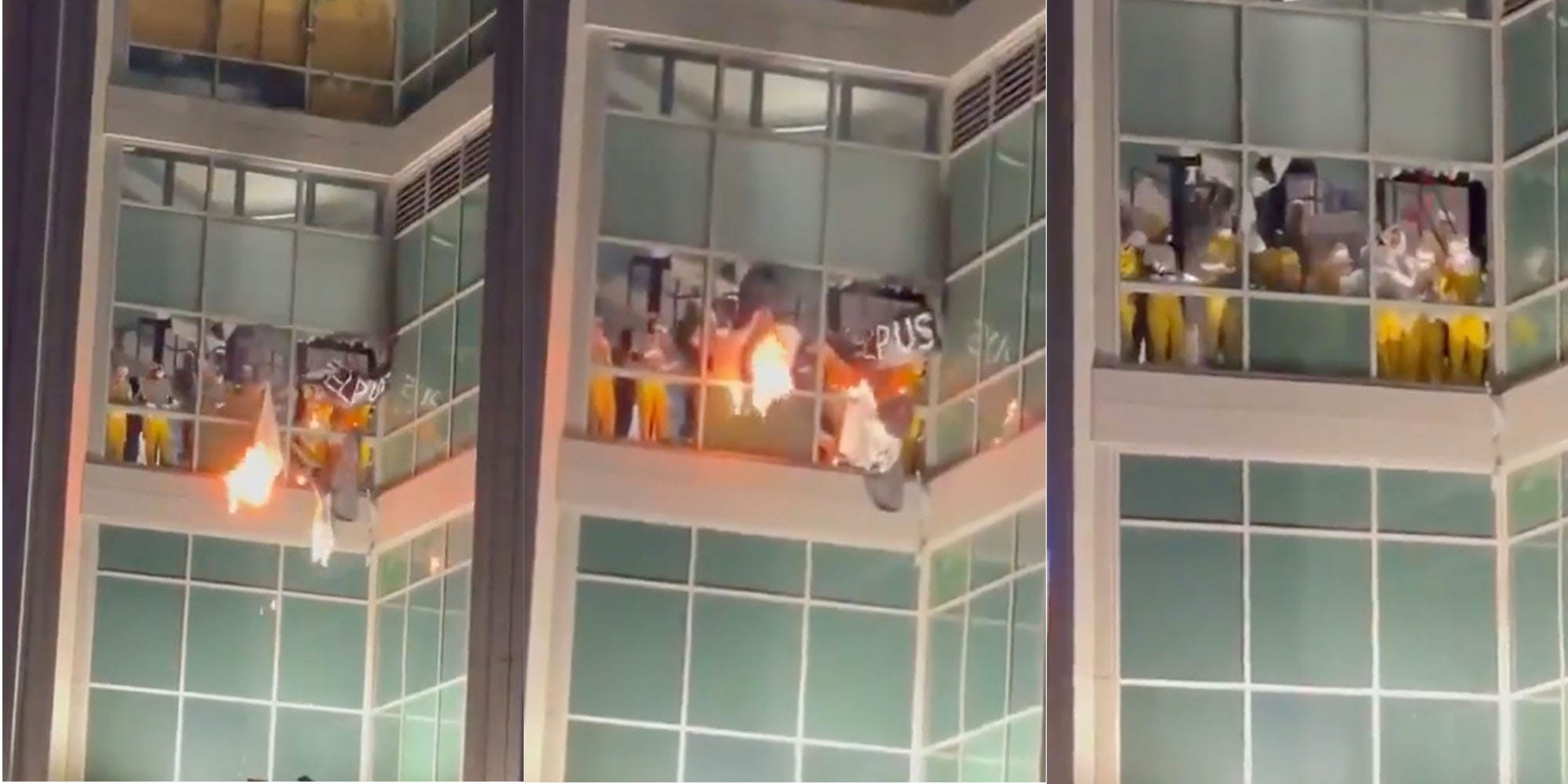 A group of inmates at a jail in downtown St. Louis broke windows, set fire to objects they threw out those windows, and chanted, “We wanna go to court” on Sunday night. The actions were characterized by at least one ally as an “uprising,” and the protest is reportedly related to a similar event at the same jail just two months prior.

The disturbance broke out Sunday night around 9pm at St. Louis’ City Justice Center, according to CBS News by way of its KMOV-TV affiliate. Reporter Alexis Zoros tweeted from the scene, sharing video of inmates throwing objects from the third floor of the facility.

When she asked Sheriff Vernon Betts who was in charge, given that the public safety director had just retired, he observed, “I guess I am.”

The TV station reported that the situation had been brought under control by about 10:30pm, with inmates moved away from the broken windows, but by 11pm, inmates broke windows on the other side of the jail and threw additional objects out the windows. Then, as that story reported, “Thirty minutes later, the inmates had disappeared again and officers could be seen inside.”

Video from the Sunday night disturbance were shared on Twitter, with the Fifty Shades of Whey account tweeting out video of the inmates chanting, “We wanna go to court.”

Inmates at a jail in St. Louis, Missouri chant "we wanna go to court" and set fires to protest poor living conditions pic.twitter.com/tyCbPVaavT

One of the more poignant tweets covering the Sunday night events came from Khalea Edwards (@314khalea), a self-identified St. Louis-based organizer whose Twitter profile declares, “Liberation for all oppressed people.” Focusing on the “Help Us” banned visible in one of the videos, her tweet reads, “Uprising at the STL city jail; they yellin’ ‘Help us.'”

Then, in a follow-up post, she shared a Facebook post in the aftermath of a past, similar event in Feb. 6, alleging troubling conditions at the jail.

She prefaced the link by asserting, “As long as prisons and the police exist, people will continue to uprise. We all deserve to be free and that means abolishing the prison industrial complex.”

as long as prisons and the police exist, people will continue to uprise. we all deserve to be free and that means abolishing the prison industrial complex

here’s a testimony from their last uprising at the STL City Jail:https://t.co/Kb3yX79i4g

That Facebook post, from EXPO St. Louis (with EXPO an abbreviation for “EX-Incarcerated People Organizing”), accuses jail officials of inhumane treatment including tear gas to quell a peaceful protest within the jail, inmates not being given sufficient winter clothing, and keeping COVID-19-infected inmates in a cell with other inmates rather than quarantining them.

The Daily Dot has reached out to Edwards for comment.

The post ‘We want court dates’: Videos show American inmates setting objects on fire, throwing them out of broken windows to protest conditions appeared first on The Daily Dot.

2021-04-07
Previous Post: Suspect in Capitol Police attack identified as Noah Green, reportedly a Nation of Islam follower
Next Post: WATCH: Dr. Fauci tries to explain why cases in Texas are dropping despite the end of social distancing and the mask mandate