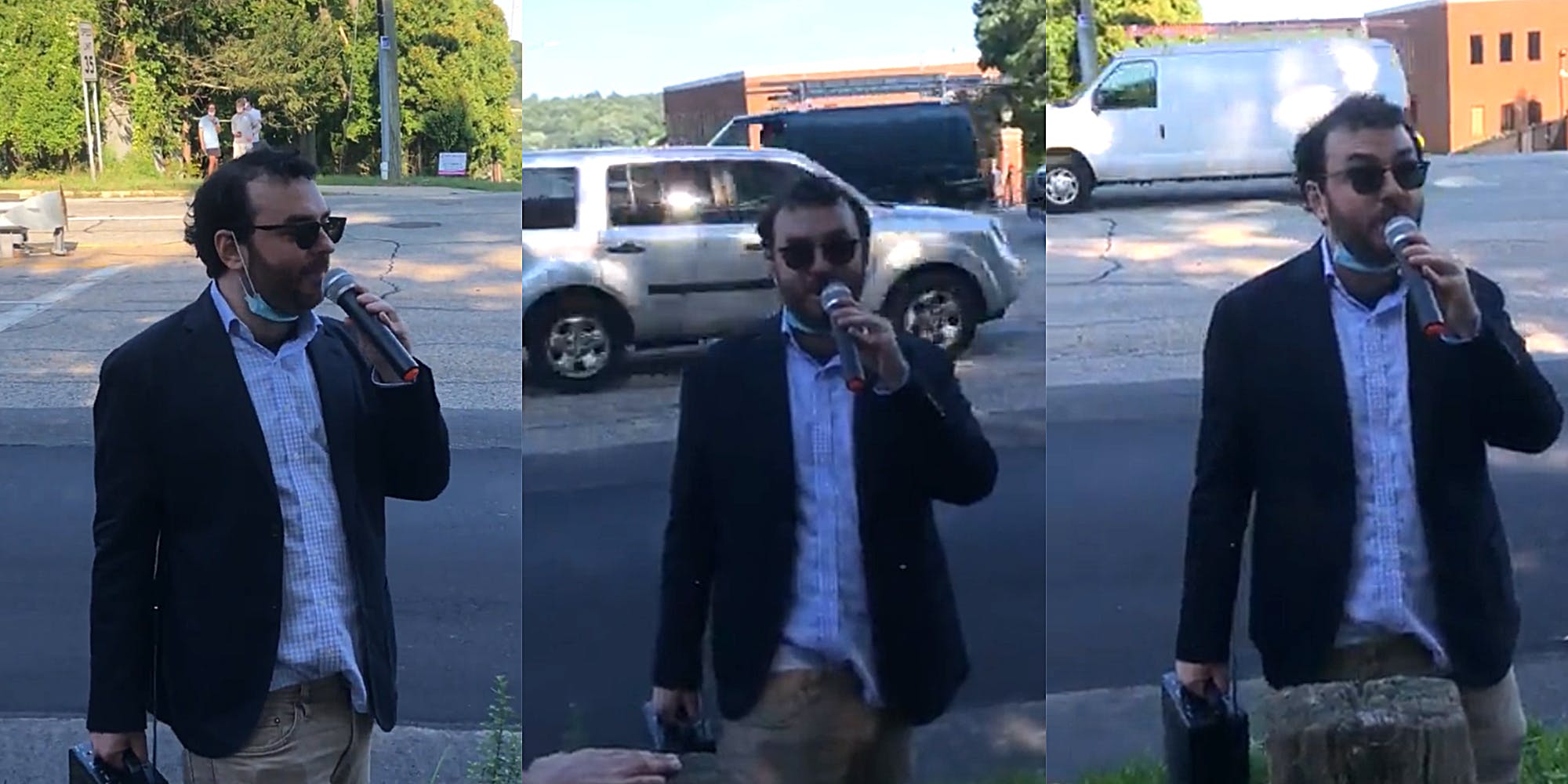 Independent journalist Michael Tracey went out to Connecticut College on Monday to give an in-person speech that led to widespread ridicule online.

The fiasco began last week after Tracey unleashed a thread on Twitter criticizing the school over its mandatory vaccination policy and mask mandates.

The blogger derided the school’s faculty as akin to “profiteers, scammers, busybodies, and neurotics using COVID-19 as an excuse to impose their weird little petty tyrannical rule.”

Connecticut College required vaccination for all students/staff, as well as mandatory testing twice a week for students, but has nonetheless shut down all in-person activities. Mass "quarantine" imposed, visits with friends prohibited, special permission required to leave campus pic.twitter.com/tda5n0mPY9

But with his Twitter tirade having little effect on the real world, Tracey took the streets. With a microphone and portable speaker in tow, Tracey set up shop at Connecticut College in an attempt to air his grievances.

Footage of the speech begins with Tracey claiming that although he could care less about the rules of a small liberal arts college, the alleged “climate of conformity” at the school compelled him to speak out on the behalf of students who feared retribution for pushing back on such policies.

The speech quickly went off the rails after Tracey began getting heckled by one student who repeatedly referred to him as “Tucker Carlson’s bitch.”

Michael Tracey visits Connecticut College ostensibly to do journalism about their covid rules but decides to give a speech to the students while standing in front of a highway holding a briefcase with an antenna on it for some reason pic.twitter.com/UTfvmqNr6I

The disastrous attempt at a rousing speech, coupled with Tracey’s half-untucked shirt and honking cars, was quickly mocked all across Twitter.

You can hear people laughing at him. It’s incredible https://t.co/1Vhy5NOl9i

“Michael Tracey again did something his left-liberal critics won’t—got his ass off the couch to go do actual reporting on a consequential societal and political conflict—and now they’re all holding hands to mock him as the outcast nerd in an attempt to feel tribally protected,” Greenwald wrote.

Michael Tracey again did something his left-liberal critics won't – got his ass off the couch to go do actual reporting on a consequential societal and political conflict – and now they're all holding hands to mock him as the outcast nerd in an attempt to feel tribally protected. https://t.co/K1SuZH5lE2

Tracey also defended his speech in a series of tweets on Tuesday in which he suggested that COVID restrictions could be enforced until the end of time.

“Just bear in mind that while the media cool kids snark and sneer at nonsense, some of the country’s most influential institutions are *at this very moment* reneging on their prior claims that vaccine = normalcy, and adopting a ‘permanent crisis’ model that could well last forever,” Tracey wrote.

There was a point when I was willingly to make reasonable allowances, personally and from a policy standpoint, to deal with an acute crisis. That has come and gone. The only reasonable course now is to confront the never-ending surveillance profiteers and busybodies

The dean of the college announced the next day that the measures put in place, described by Tracey as authoritarian, had worked to bring down the number of positive infections on campus. As a result, the school said it would begin easing up on some COVID-related restrictions.

Unsurprisingly, Tracey celebrated the announcement in a tweet in which he appeared to suggest that his speech had somehow influenced the decision.

“Less than 24 hours after my visit to Connecticut College, and after administrators went into DEFCON mode to prevent my entry, the benevolent Dean announces he talked to Fauci and the lockdown will be lifted immediately, after previously giving no indication this would happen,” Tracey wrote.

The post ‘Tucker Carlson’s b*tch’: Michael Tracey heckled for bringing megaphone to college to complain about its COVID restrictions appeared first on The Daily Dot.

2021-09-15
Previous Post: The White House press corps reportedly had a celebrity driver during Biden’s visit to California
Next Post: YIKES! Bill de Blasio’s Met Gala appearance could be even worse than @AOC’s