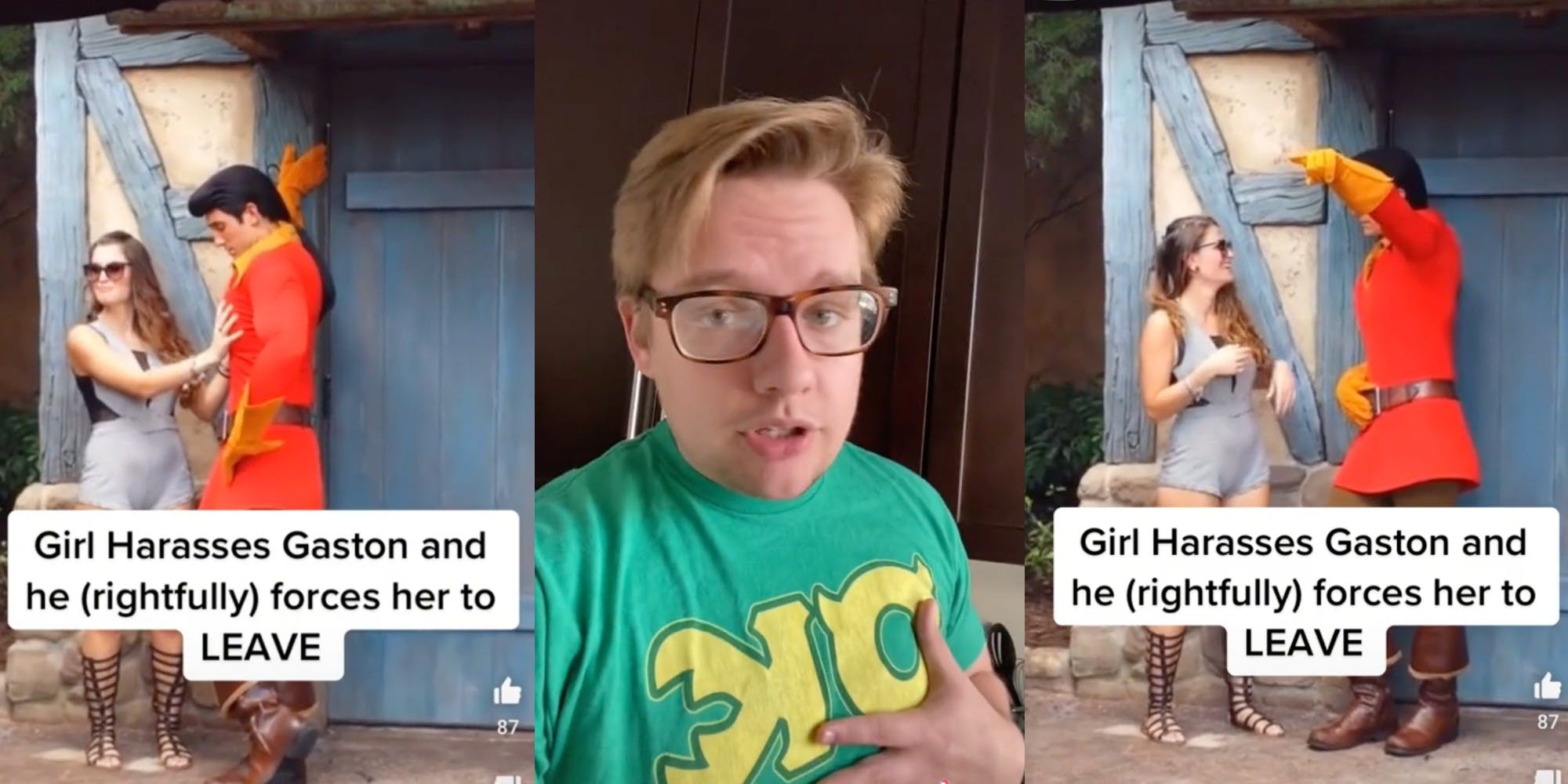 A Disney park actor playing Gaston from Beauty and the Beast told a guest to “leave” in a video that resurfaced in a viral TikTok after the individual touched his chest. The actor said, “There’s children.”

Evan Snead, whose TikTok username is @evansnead, posts content regarding Disney parks and characters. The Gaston video, posted Thursday, received more than 6.7 million views. He wrote that this “boils my blood” and urged his followers not to touch or be rude to Disney characters in Disney parks.

In the video, a woman is seen touching Gaston’s chest as he seemingly takes a picture with her while leaning on a wall. Gaston immediately nudges the woman away and says, “Get out now.” The woman laughs, comes back toward Gaston, and attempts to touch him again. Gaston says “leave” and points away.

“You’re done,” Gaston says. “There’s children.” The video then cuts to Snead who says, “Please do not be that person.”

Snead says that the video is old because Gaston is “not meeting” right now, but “he was every bit in the right to do that.” He says that the characters do not like that kind of behavior and will not play into it.

“If you do not want a stranger coming up to you in public at your place of work and putting their hands all over you then don’t do it to the characters,” Snead says. “The characters want you to have a great time and enjoy meeting them, but it is their place of work. It is a family place of business, and they are also people.”

Snead also urges people not to use uncomfortable touching or language and to be nice to the characters because “they are people.”

Disney, which did not immediately respond to the Daily Dot’s request for comment, has had staff members report instances of inappropriate touching by park guests in the past.

In December 2019, a 36-year-old woman who played Mickey Mouse filed a police report after having to seek medical treatment because a guest “patted the head of her costume five times,” USA Today reports.

Commenters supported Gaston’s decision, saying “No one enforces healthy workplace boundaries like Gaston,” which references the song “Gaston” from Beauty and the Beast. Another wrote, “how about we don’t touch ANYONE without permission?”

“As a character performer please don’t do things like this,” one commented. “And another big thing is to please don’t let your children run up hitting us and stuff.”

One redditor said that they “love that Gaston did this because there certainly were kids watching and it shows a perfect example of what to do when someone touches you inappropriately.”

Another joked, “She forgot she was in the Magic Kingdom, not Magic Mike.”

2021-09-26
Previous Post: ‘The happiest day of my life’: Here are photos of people really enamored with the COVID vaccine
Next Post: ”Please clap’: Photo allegedly captures Jeb Bush calling for help after he locked his keys in his car