Is the trend for shapeless dresses actually oppressive—or is that just white feminist nonsense? 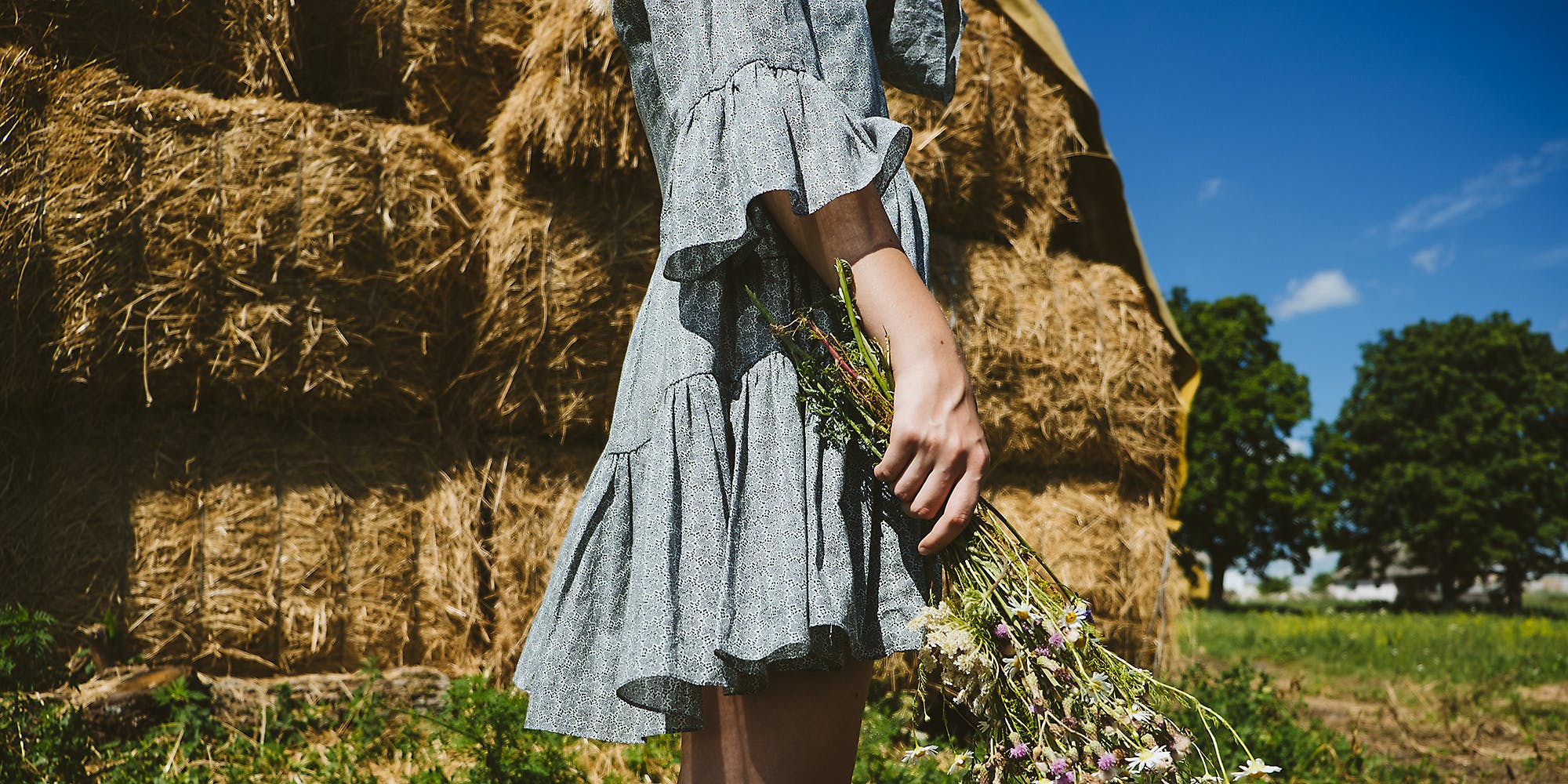 The recent cottagecore-inspired trend of loose, throwback ’70s dresses upset some people. But while critics see it as a conservative, repressive trend, fuelled by recent attacks on women’s bodily autonomy and sexual freedom, others think it’s really not that deep—and moreover that framing it as such is typical white feminist nonsense.

Pls this is such a weird intersect of white feminism / islamophobia / conspiracy theories and more https://t.co/k78d5yIjZb

Cottagecore, an aesthetic created by young, predominantly queer women on Tumblr and TikTok, hit mainstream fashion last year with floral fabrics, long skirts, and flowing lines. Drawing on idealized European peasant and American colonizer aesthetics its roots lie in sustainability, DIY, and a celebration of aspects of femininity, often derided as silly or trivial, for the pleasure of women and femmes instead of men. While justifiably criticized for its overwhelming whiteness, as well as the idealization through its Little House on the Prairie elements of a violently racist and colonial time, one thing it’s not about is a sublimation to patriarchal whims—despite the tradwives‘ aesthetic attraction to it.

relax yt women it’s just cottagecore… this is not a conspiracy to take away ur rights https://t.co/9B1ExC5H6o

It cracks me up when middle aged feminists say stuff like this because it proves how out of touch they are with current fashion trends. Cottage core is an extremely popular fashion trend rn that is meant to give women power in their femininity. https://t.co/4DbBCPXnl2

Obviously much of that gets lost once something turns mainstream. Certainly, the anti-capitalist sentiments common in the online communities are at best being weaponized by large corporations to get fans of the aesthetic to buy their mass-produced clothing. But that’s not the critique being leveled here. In fact, many of the critics seem not to have heard of cottagecore despite the not insignificant amount of media coverage the trend has received since the start of the pandemic.

The actual moral panic being had over these dresses is whether or not their relative shapelessness and lack of sex appeal is an attempt by conservative forces to rob women of their sexuality and self-esteem, quite possibly for fundamentalist religious reasons.

The Handmaid’s Tale was the very first thing that came to mind when I saw them! 😳😂

Why are we suddenly trying to cover up women? Why are we pushing a style worn over 150 years ago?

There were plenty of comparisons to extremist Christian communities as well as the now predictable cry of Sharia law that comes up whenever people want a scare-oppressor instead of recognizing homegrown, oppressive Western movements for what they are.

Ironically, reducing women’s self-esteem and sexuality to whether or not they show exactly the right amount of flesh is a traditionally patriarchal and oppressive move all by itself. The adoption of it by self-proclaimed feminists, where the only difference is the exact placement of the hemline, is also a classic white feminist take. Both speak over the woman and her own feelings about herself, her body, and why she’s wearing what she wears.

Instead of recognizing that different women have different tastes, different comfort levels, and different aesthetic preferences, far too many people are seeing a conspiracy theory where right-wing Christians try to hide the fact that women have knees. In addition, these kinds of comments treat hijabi women, Jewish women, and other women who choose, for any number of reasons, to wear less revealing clothing, as either completely lacking in agency or traitors to the patriarchy in the process.

Just as irritating are the men who saw the trend, saw the complaints, and decided that the existence of these dresses was some kind of moral victory over Godlessness and sexual freedom.

They’re just dresses. Other styles of clothing, including those that show a lot of skin, still exist.

Meanwhile, literally ten feet away from you. pic.twitter.com/Vgc0cMCsCF

jfc, the replies. It's 4 long sleeved dresses within an entire Target. No one is trying to make you into a sister wife. It's honestly not that deep. https://t.co/5ANmMcmEa8

It’s perfectly fine not to like a fashion trend, of course, and plenty of people who grew up in certain kinds of Christian homes have an understandably visceral “nope” reaction to seeing these kinds of clothes for the same reasons that the tradwives periodically try to take over cottagecore—right-wingers, fundamentalists and bigots are often drawn to historic aesthetics, just for different reasons. Cottagecore aficionados want to run through fields of wheat with their wives and pretend we’re not in the middle of a climate apocalypse, and tradwives want to literally go back in time to an objectively worse period of history. None of this means that long, floral dresses are an existential threat to women’s rights and freedoms.

The post Is the trend for shapeless dresses actually oppressive—or is that just white feminist nonsense? appeared first on The Daily Dot.

2021-09-22
Previous Post: Media Matters senior fellow deletes tweet because ‘there was context collapse’ once conservatives picked it up
Next Post: ‘We’ll be out here everyday’: Brian Laundrie’s family hounded by media and protestors outside their home in viral TikToks