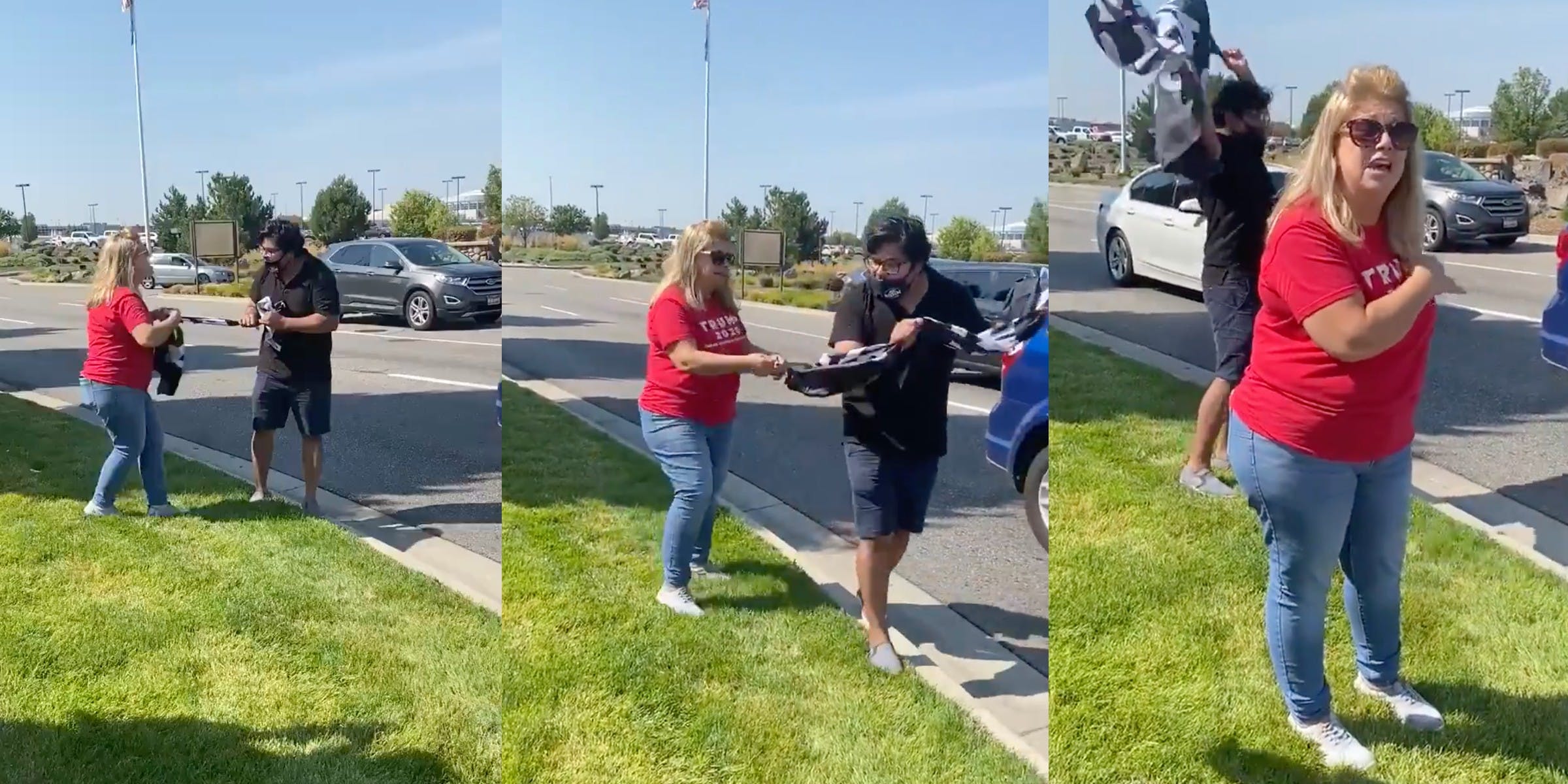 A video shared on Twitter this week shows a white woman in a “Trump 2020” T-shirt yelling at a protester and trying to snatch a Black Lives Matter flag from his hands.

In a pair of videos, the woman verbally attacks the protester and repeatedly asks if they know who’s in charge of the Black Lives Matter movement.

The first video was shared by journalist Kyle Land on Monday and has since been viewed more than 56,000 times. Land reported that “drivers also screamed homophobic slurs” at the protester during the incident in Boise, Idaho. The Daily Dot reached out to Land for comment via Twitter.

A woman with a Trump shirt attempted to rip a BLM flag from a counter protestor’s hands outside the protest in Boise. Drivers also screamed homophobic slurs at them pic.twitter.com/QOZTEHUcGI

The video begins with the woman gripping the protester’s flag while shaking her hands and asking, “Who is the head of this?”

“Let go of my flag,” the protester says, trying to pull away from her.

As the protester breaks away from the woman, she follows him and says, “You should get informed about who you’re supporting.”

“Lady, you need to get control of yourself,” the protester says.

“I’m not stopping him,” the woman says to people off-camera. “I wanted him to tell me who heads Black Lives Matter, and he doesn’t know.”

“You’re an adult, act like one,” the protester says.

“I’m just trying to help you,” the woman says before exiting the frame of the camera.

In another video that Land said was filmed by the protester’s boyfriend, the woman berates the protester with more questions about who is in charge of the BLM movement.

This video was taken by the man’s boyfriend just moments before.

In the background, a group of people drive by and yell homophobic slurs at the group.

The video was later shared by @davenwworld_2, a Twitter account that documents incidents of discrimination and exposes racists.

Many applauded the protester for asking the woman to “get control of [her]self.”

That’s the world we now live in. I think it was in FL where a student was addressing a City Council and “adults” were heckling him.

“I’m still laughing! Like he was speaking to a child explaining why they had to give teacher back the flag!” one Twitter user wrote in response to the video.