‘I don’t have to provide it to you!’: Video shows Karen screaming at employee who asks what medical condition prevents mask-wearing 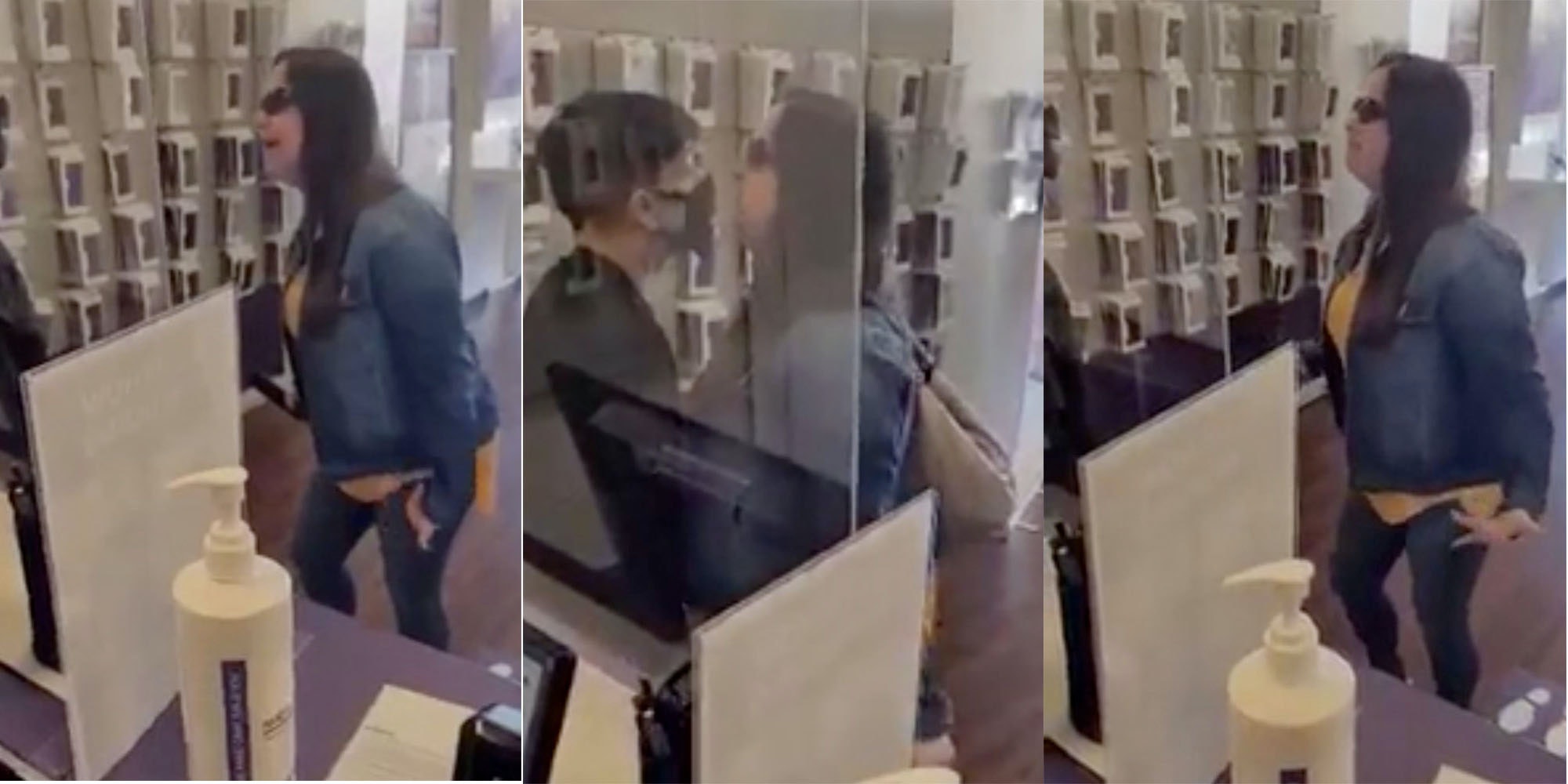 A video shared to a Reddit subreddit group dedicated to bad “Karen” behavior shows a woman getting into a young store employee’s face, screaming about her medical condition.

The video, shared on the r/FuckYouKaren subreddit by redditor u/ShadowKirby, was titled, “My friend had the privilege of dealing with a Karren (sic) today.”

In the video, a woman wearing sunglasses comes very close to a store clerk wearing a mask, and forcefully yells, “No, I fucking don’t need a mask” directly into the clerk’s face. It appears to take place at a phone repair shop.

Then, backing away, she repeats, “No, I don’t need a mask,” before shrieking, “I have a medical condition that prevents me from wearing a mask!”

Then, even more shrilly, she yells, “I have a doctor’s note that says I have a medical condition!”

The clerk calmly asks, “What is it?”

That question doesn’t appear to sit well with her; she shrieks, “I don’t have to provide it to you! The law says people with disabilities are protected!”

She then adds, “By the law, you do not have to reveal with your disability is.”

The video, shot by the clerk’s co-worker from behind a counter, ends there, but it was enough for commenters to first deride her behavior, and then debate provisions for disabled store customers under the Americans with Disabilities Act.

One of the most upvoted comments noted, “I legit cannot stand people misstating what the law is and expecting everyone to agree with them just because they said ‘it’s the law!'” before adding, “No, Karen. It’s not.”

Another noted, “The correct response from all retail workers should be ‘then contact your lawyer.’ This isn’t the time or place to argue ‘the law.’ The store has made their decision. If she feels illegally discriminated against, she can file a suit. That’s how the system works. She won’t file a suit though because deep down she knows she’s full of shit.”

Others chimed in arguing that the store actually does need to provide accommodations to people with disabilities. But as a redditor operating under the handle KFC Conspiracy argued, “Of course the interesting thing about ‘The Law’ is the store is only required to offer reasonable alternative accommodation per ADA. That could mean offering to let the person wait outside while someone gets the items they want. It doesn’t mean have the person walk in and spit all over you.”

Also, it was unclear if the Karen in the video was at the store to buy something or to just pick a fight with a young store employee.

The post ‘I don’t have to provide it to you!’: Video shows Karen screaming at employee who asks what medical condition prevents mask-wearing appeared first on The Daily Dot.

2021-03-24
Previous Post: Old photos of Miami Beach dupe internet during COVID-19 spring break chaos
Next Post: ‘What’s so funny’? Kamala Harris’ reaction after being asked if she plans to visit the border was something else