How South Carolina became a troubling new hub for QAnon 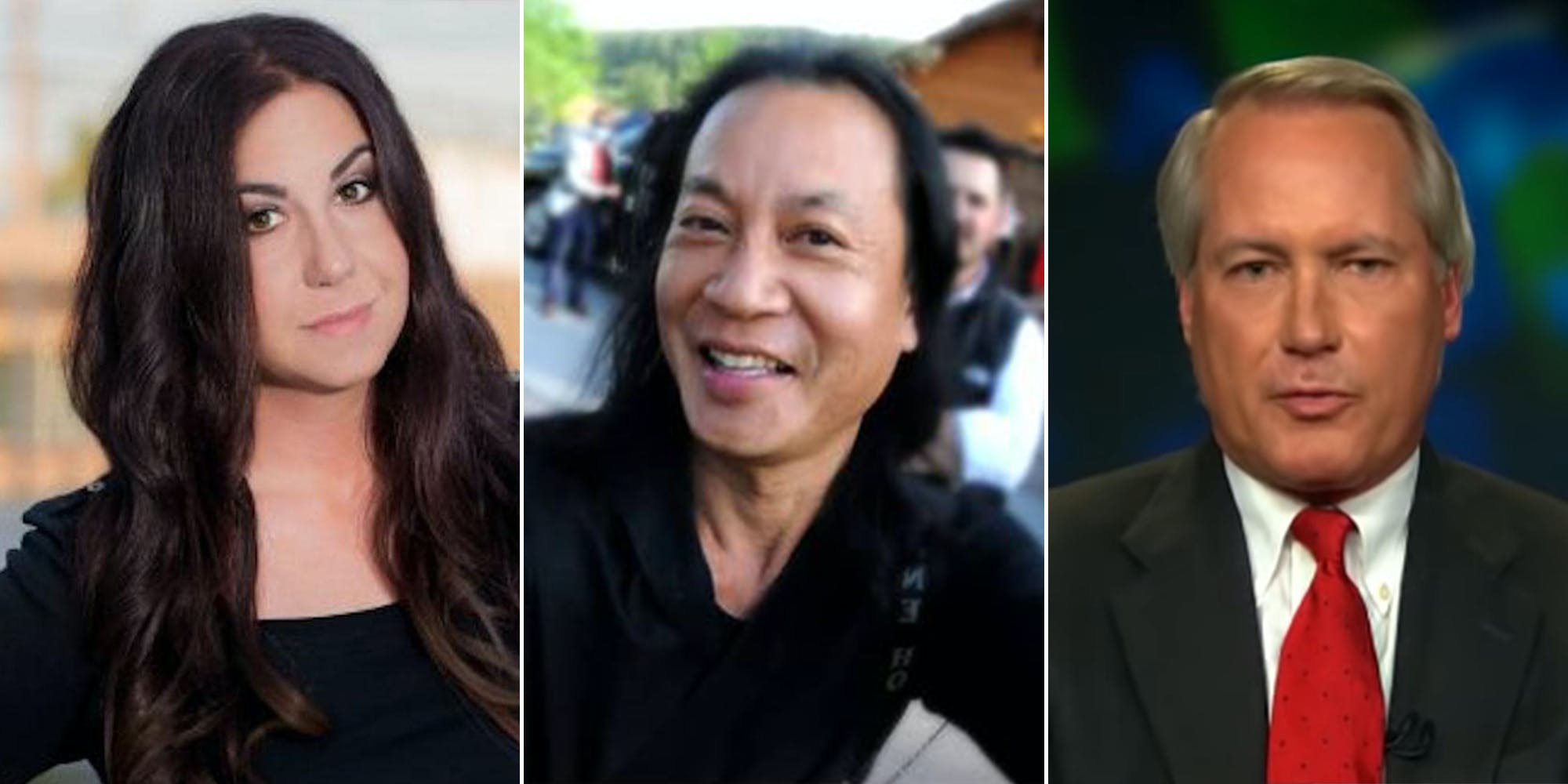 Jan. 20, 2021 was the end of an era for QAnon. Without former President Donald Trump in the White House, many wondered what would come of the conspiracy theory that the world is controlled by an international cabal of Satanists who rape and eat children. Simultaneously, the supposed government insider, “Q,” whose thousands of cryptic messages on insidious websites gave rise to the conspiracy, went silent. Without the twin pillars of Trump and Q to catalyze them, many hoped that QAnon would fracture and fall apart like other cults before it. But the South Carolina QAnon movement is here to save it.

While some figureheads have faded away and others have turned to outlandish ventures, some of its biggest stars are determined to remake the Republican Party in the QAnon image. Three have descended on South Carolina: attorney L. Lin Wood, who’s fast become one of the most extreme, some would say extremely unhinged, QAnon followers; podcaster Tracy “Beanz” Diaz, one of the first proponents of QAnon; and Gene Ho, Trump’s former campaign photographer who was an early QAnon adopter among those with direct ties to Trump.

South Carolina is an inarguably savvy choice for the three. Former General Mike Flynn, a QAnon hero second only to Trump, has made multiple public appearances before enthusiastic audiences in South Carolina in recent months, including the Rock the Red gathering just last weekend, which Wood also headlined. The southern state is steeped in Christianity, is two-thirds white, and is deep, deep red. Since 1964, South Carolina has voted for one Democratic presidential candidate, Jimmy Carter. All these qualities make a favorable political climate for QAnon, which has attracted many white, Republican, evangelical Christians.

Wood ran for chair of the South Carolina Republican Party. He lost against an incumbent endorsed by Trump. Today he continues smearing his former opponent and others he deems Republicans in name only (RINOs), like Sen. Lindsey Graham (R-S.C.). Diaz won a seat on the Republican state executive committee this spring. Ho is a candidate for mayor of Myrtle Beach. He lives in the same county as Diaz. A Media Matters researcher reported that a QAnon supporter was elected to the county council in Beaufort, the county where Wood reportedly bought a former plantation earlier this year.

Neither the South Carolina Republican Party nor its chairman responded to requests for comment Tuesday afternoon. In May, Chairman Drew McKissick told the Bulwark that “QAnon or whatever” is not welcome in the state.

“They are going to be—to whatever degree they are there—flushed out of the party in SC. Because they do not represent the party and they will not,” McKissick reportedly said.

The state party may not lay out the red carpet for the trio, but their efforts prove that not only is Trump Republicanism here to stay, so is QAnon, though likely a version without quite so many overt references to frazzledrip, John F. Kennedy, Jr., and lizard people.

Before Trump, Ho was a wedding and celebrity photographer based in Myrtle Beach, one of South Carolina’s most popular tourist destinations, where his office is steps from boardwalk attractions like the Ripley’s Believe It Or Not! Museum. When he made Ho an official photographer for his first presidential campaign in 2015, Trump set him on course to becoming a quasi-celebrity in his own right.

Ho grabbed the opportunity with both hands. He later wrote a fawning book about his experience: Trumpography: How Biblical principles paved the way to the American presidency.

At some point, he morphed from Trump Republican into QAnon follower. In 2019, Ho spoke at a Washington, D.C. QAnon rally. Will Sommer of the Daily Beast reported that most speakers were “pretty vague about QAnon’s nuttiest aspects,” such as red shoes made from children’s skin. Not Ho.

“Gene Ho is accusing world elites of drinking children’s blood,” Sommer tweeted, along with a picture of Ho onstage.

Last summer, Ho was one of the speakers at the Red Pill Roadshow, a QAnon conference the Daily Dot likened to a tent revival.

In November, when it became clear to reasonable observers that President Joe Biden had won the election, Ho announced that he was running for mayor of Myrtle Beach. Rather than spend his time campaigning in his home city of 33,000, over the following weeks, he kept at the election conspiracy theory grindstone, speaking at multiple out-of-state Stop the Steal events. Days before the Capitol riot, Ho cheerfully posted on Facebook that he’d be on the same stage as George Papadopoulos and Roger Stone.

He was much less cheerful after the bloodthirsty mob, which included many QAnon followers, tried to overthrow the government. The evening of the riot, Ho took to Facebook to claim that he and his wife had left early. He alluded to a widely debunked claim, which remains popular among far-right conspiracists, that the rioters were antifa saboteurs trying to make Trump and his supporters look bad.

“The crowd that stormed the Capital building had been THERE at least an HOUR before Trump even FINISHED his speech,” Ho wrote. “Some of these people ‘came prepared’ dressed in ‘riot gear.'”

“See the pictures. Do they LOOK like there [sic] were there to riot? Shame how the [mainstream media] has painted Trump’s inspiring speech and how the rally goers are being portrayed,” he added.

Ho made further attempts to distance himself from the riot the next day. When a photo of him with the QAnon shaman started circulating, Ho claimed it had been taken weeks earlier and wrote that he supports “peaceful” protests.

“He was a person in the crowd that came up to ME and asked me for a picture,” Ho wrote on Facebook. “That picture was NOT taken yesterday nor do I know him on a personal level.”

Whatever he may have felt immediately after the Capitol riot, since then, Ho has happily continued riding the QAnon train. He’s been among the headliners at speaking engagements around the country, appearing alongside QAnon royalty like Sidney Powell, Mike Lindell, and Flynn. He was in the lineup when actor Jim Caviezel stunned fans by going full QAnon in April. On social media, he often posts photos of him and his family hanging out with Flynn or having dinner with Powell.

And now he wants to be mayor of Myrtle Beach. His website doesn’t mention blood sacrifices, frazzledrip, or even QAnon, however. It does note that he’s the official photographer for Diamond & Silk, a quote from whom he used in his campaign announcement, and says some vague things about taking Myrtle Beach back. Nevertheless, if he wins, which is entirely possible in a county where Trump received 66% of the vote, he’ll have Trump and QAnon to thank.

Like Ho, Diaz and Wood have hitched themselves to the QAnon wagon, and they’re going to ride it as far as it’ll take them. Their current destination is pushing the South Carolina Republican Party further right to carve out space for themselves. Wood, a prolific Telegram user with nearly 1 million subscribers on one of his channels, often derides Republicans in the state, such as Graham, who he claims is in the cabal.

In March, Diaz shared a hit list on her verified Gab account of Republicans who “MUST be held accountable and primaried in 2022” based on their votes to impeach Trump and remove QAnon follower Rep. Marjorie Taylor Greene (R-Ga.) from committees, and their refusal to challenge the Electoral College vote. Two of South Carolina’s Republican congresspersons are on the list: Reps. Nancy Mace and Tom Rice. Diaz and Ho both live in Rice’s district.

While it’s not clear to what extent they’re coordinating other than swapping statements of support, Flynn is the tie that binds. In the Facebook announcement that she was running for state executive committeewoman, Diaz wrote of working with Flynn to overturn the election for Trump. He’s a frequent face on Ho’s social media channels. Wood writes glowing praise of him on Telegram.

Flynn has returned the favor by stumping for them in South Carolina. If he, Wood, Diaz, and Ho get their way, Republican representatives from the Palmetto State who stood on the opposite side of QAnon or Trump better watch out.

“In 2016 there was just one Trump,” Gene Ho wrote on Facebook on Jan. 2. “Now today there is 75 million Trumps and we are all ready to do our part and become leaders ourselves.”

The post How South Carolina became a troubling new hub for QAnon appeared first on The Daily Dot.

2021-06-10
Previous Post: WH reporter dismisses GOPers/conservatives ‘going crazy’ over Kamala Harris’ horrible interview (but asks Jen Psaki if they might ‘have a point’) [video]
Next Post: SUPERCUT! Here’s a compilation of talking heads blaming Trump for the Wuhan lab-leak theory not being investigated