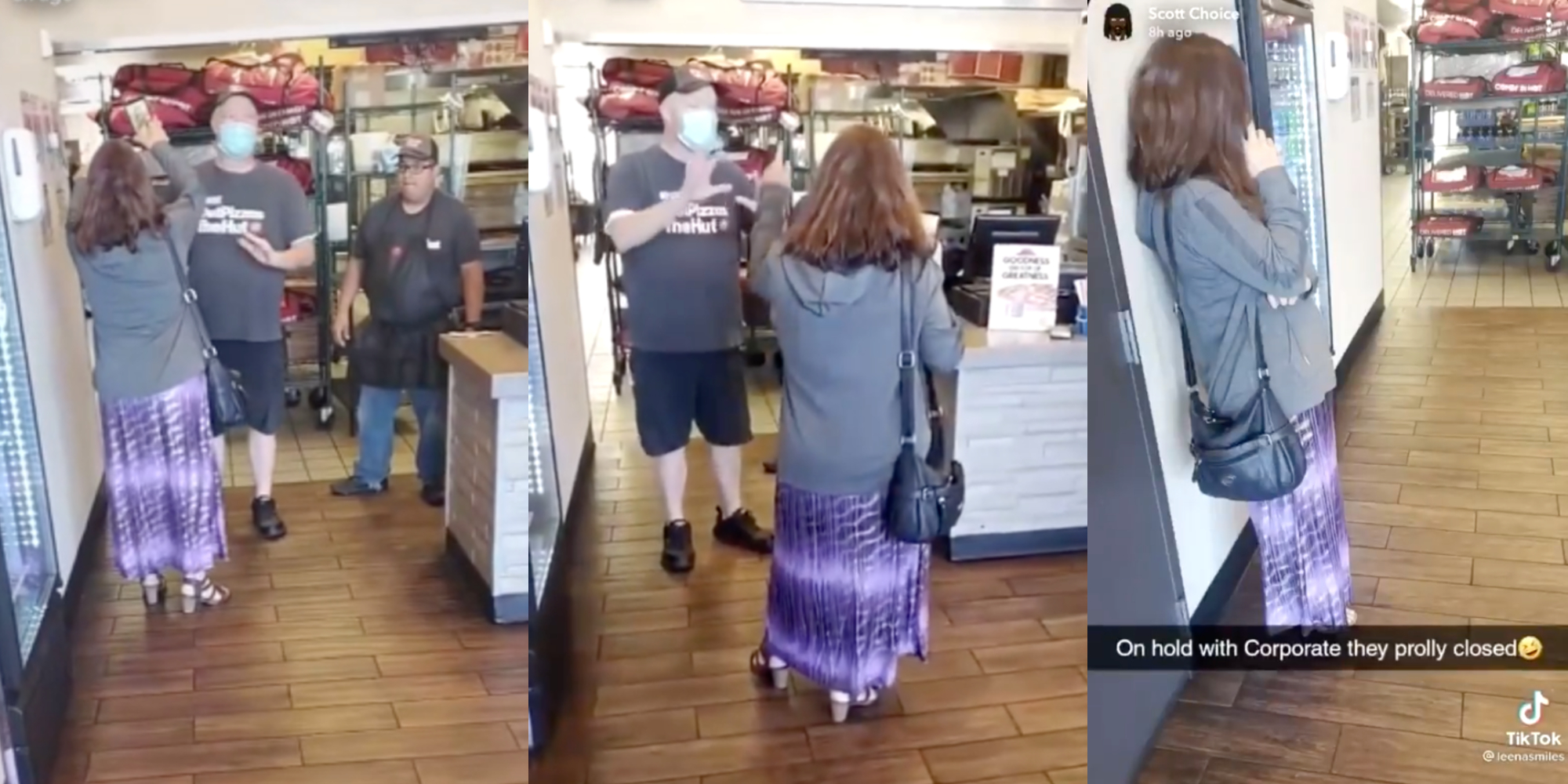 A customer allegedly threw a pizza at a Pizza Hut employee and then demanded that her pizza be remade.

In a viral TikTok video featuring portions of the woman’s tirade, the woman can be seen verbally abusing the employee. “You goddamn piece of shit; you don’t cuss at me!” she screams at him, appearing to throw something at him.

The worker tells her to “get the fuck out” and that he’s “calling the cops.”

The woman, in turn, threatens to call his manager.

The worker’s apparent manager then gets involved, telling the woman she has “to step back.” “Ma’am, you have to step back, please,” the manager reiterates.

She then demands her pizza be “remade now,” stomping her foot for emphasis. She also accuses the first worker of calling her a “bitch” and “trying to throw a pizza at” her.

The employee can be heard shouting that she threw the pizza at him. “I have burn marks,” he says.

The woman continues demanding that her pizza be remade and asks to speak with another manager. “Calm down. Stop yelling at our employees, and stay behind the counter or else we have to call the cops. That’s not optional for us. That’s our corporate policy,” the manager says to her.

At one point in the video, the woman appears to ask Siri for the “corporate number for Pizza Hut.”

The video ends with the woman on the phone, presumably trying to call the Pizza Hut corporate office.

Customer in Texas has a meltdown and verbally harasses Pizza Hut employees pic.twitter.com/vRN4JU6Gni

It’s unclear why or how the altercation started. There are various skips throughout the video. Many viewers, however, are commenting on how the woman could expect the workers to comply with her demand to have her pizza remade given how she treated them.

“Never understood why people want to piss off the person making their food,” another added.

The incident occured at a Pizza Hut in Fort Worth, Texas, according to a stamp featuring the location on one of the restaurant’s walls.

The video appears to have been originally posted to Snapchat. While many social media users, including davenewworld_2, reposted leenasmiles’ copy of the video, leenasmiles notes that it is not their video.

It’s also unclear when the video was filmed. The Daily Dot has reached out to @leenasmiles for more information as well as Pizza Hut.

The post Customer allegedly burns Pizza Hut worker by throwing pizza at him—and then expects her order to be remade appeared first on The Daily Dot.

2021-04-01
Previous Post: CNN analyst Asha Rangappa wants gov’t to punish all the ‘goobers’ who still believe in stuff like ‘individual ‘freedom” during the pandemic
Next Post: ‘Feels like the beginning of a Purge film’: PM Justin Trudeau’s got special plans for travelers returning to Canada during the COVID19 pandemic