Most of the time, vampires are the villains in Hollywood movies. They’re portrayed as soulless bloodsuckers who pose an existential threat to all humanity. But sometimes even a vampire can be a hero. That’s the case with Morbius, a Marvel hero who’s set to be portrayed by Jared Leto in Sony’s upcoming Spider-Man spin-off movie.

Now that the first trailer for Morbius has arrived and revealed an unexpected Spider-Man connection, here’s everything you need to know about the man they call “The Living Vampire.”
Morbius Explained: The Basics
Dr. Michael Morbius was a respected biochemist suffering from a rare and fatal blood disease. Desperate for a cure, Morbius performed dangerous experiments on himself using vampire bat DNA and inadvertently transformed into a “living vampire.” While he wasn’t actually bitten by one of the many vampires that live in the Marvel Universe, Morbius’ condition has many of the same symptoms. He has a never-ending thirst for blood and must forever live apart from human society.

Despite the cruel hand life has dealt him, Morbius does his best to use his knowledge and his vampiric abilities for good. He’s proven himself a hero many times over, both as an ally of Spider-Man and a member of teams like the Midnight Sons. But even so, his dark side always threatens to consume him.
Morbius’ Powers and Abilities
Though Morbius isn’t a vampire in the traditional, supernatural sense, he has many of the same abilities. He possesses superhuman strength and speed, limited flight and the ability to hypnotize others. He also has a Wolverine-like healing factor that allows him to recover from otherwise fatal wounds. Morbius can sometimes infect his victims with “pseudo-vampirism,” though this only happens in rare cases. 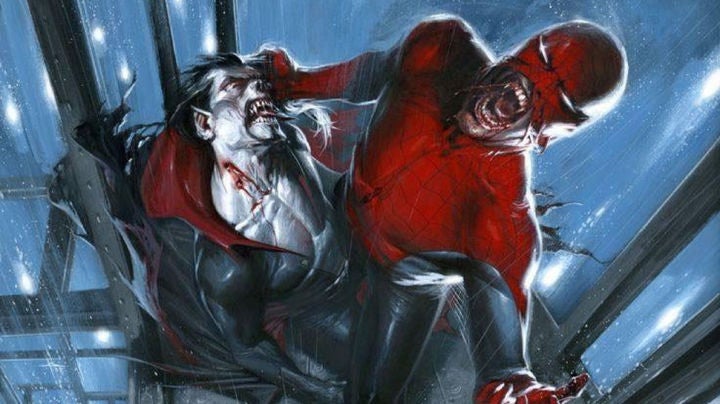 Morbius also possesses some traditional vampire weaknesses. He has a constant need for human blood, a need that he does his best to satisfy through the use of serums rather than taking human victims. Morbius has developed a special formula using Spider-Man’s blood that quenches his thirst for longer periods of time. His skin is also susceptible to burning in daylight, though not to the extent of most vampires. Morbius also lacks traditional vampire weaknesses to crosses, garlic, holy water, etc.
Morbius: Origin and Background
Morbius was created by writer Roy Thomas and artist Gil Kane and debuted in 1971’s Amazing Spider-Man #101. That issue was actually the first not to be written by co-creator Stan Lee. 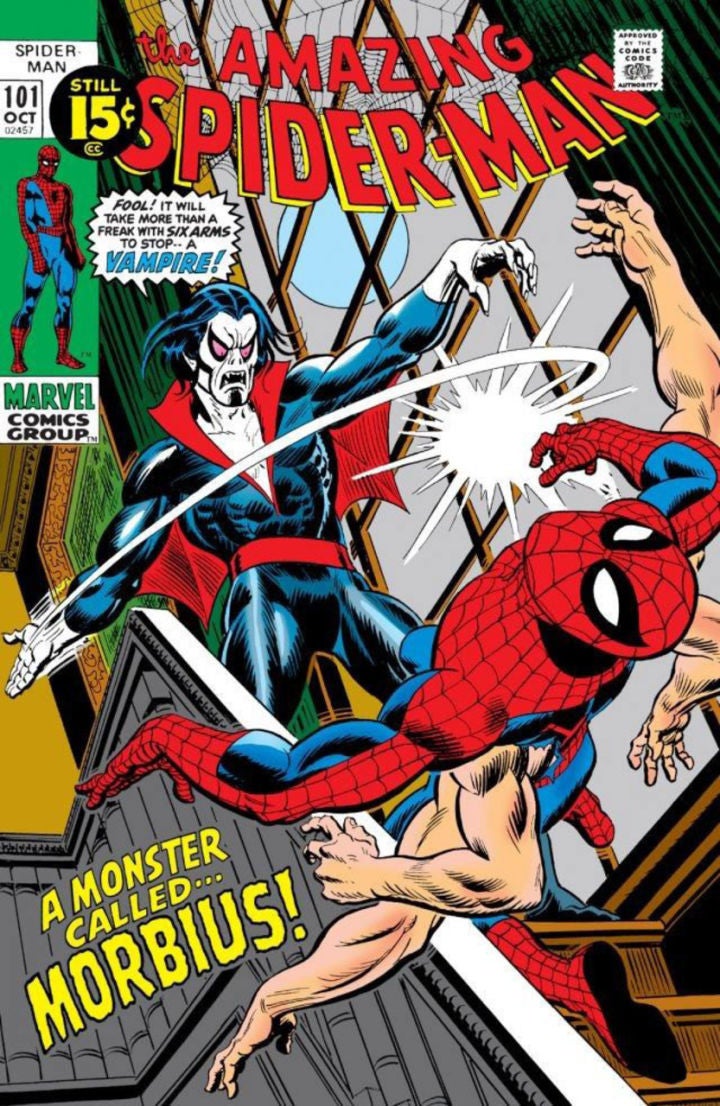 The character was conceived after the Comics Code Authority lifted certain restrictions on the use of vampires and supernatural creatures in comics. Morbius’ status as a “living vampire” both made him unique and helped make him more marketable as a hero. The character was inspired by Thomas’ love of classic science fiction films, while Kane specifically modeled Morbius’ appearance on actor Jack Palance.

Initially, Morbius was cast as a tragic villain figure. His own story became intertwined with that of the Lizard, another Spider-Man villain who inadvertently transformed himself into a hideous monster while trying to cure a physical ailment.  However, it wasn’t long before the character branched out on his own. He became a recurring player in ’70s-era anthology series like Vampire Tales and Adventure Into Fear. The latter series established Morbius’ long-standing feud with the vampire hunter Blade.

It wasn’t until 1992, though, that Morbius gained his own solo series in Morbius the Living Vampire. That series was one of several supernatural-focused books to launch out of a crossover called “Rise of the Midnight Sons.” During this period, Morbius’ adventures became closely intertwined with those of supernatural heroes like Ghost Rider, Hellstorm, Jennifer Kale and Werewolf by Night.

Following the end of Morbius’ solo series at issue #23, the character continued to play a recurring role throughout the Marvel Universe. For instance, he appeared in Marvel Zombies 3, working alongside other heroes to prevent his universe from becoming infected by the zombie plague that had ravaged other universes. He also appeared in a Punisher storyline called “Frankencastle,” where he helped bring the Punisher back to life as a Frankenstein-like beast following the character’s fatal clash with Daken. 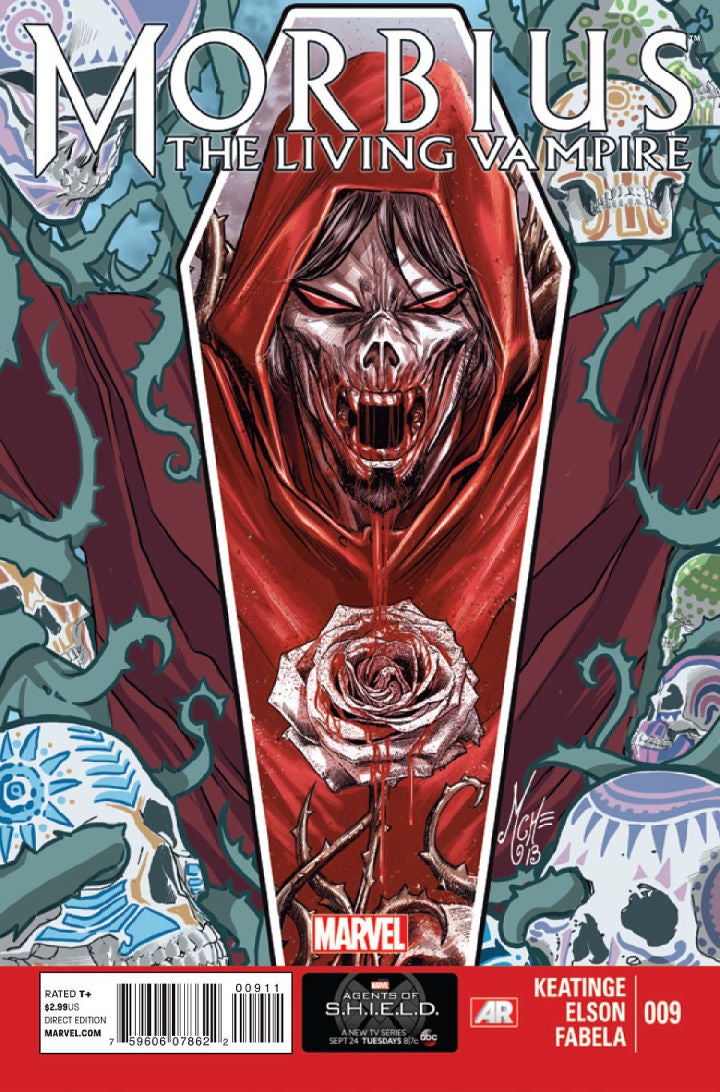 More recently, Morbius played a pivotal role in writer Dan Slott’s Amazing Spider-Man run, where he was revealed to be secretly working at Peter Parker’s new place of employment, Horizon Labs. Amazing Spider-Man and Superior Spider-Man paved the way for another short-lived Morbius comic in 2013, written by Joe Keatinge and drawn by Rich Elson.
Morbius: Beyond the Comics
Given his vampiric trappings, Morbius has proven to be a difficult character to adapt to Marvel’s other multimedia projects. The character made his animated debut in 1994’s Spider-Man: The Animated Series (voiced by Nick Jameson), where he was depicted as a scientist transformed after being bitten by a vampire bat that had drank Spider-Man’s irradiated blood. Because of strict censorship standards, this version of Morbius was only allowed to be depicted as draining blood through suckers on his hands, and his dialogue emphasized his need for “plasma” rather than blood.

Morbius later appeared as a recurring character in the animated series Ultimate Spider-Man vs. The Sinister Six (voiced by Benjamin Diskin), where he was re-imagined as a Hydra scientist who specializes in symbiotes. Morbius eventually transformed into his living vampire form on the series, with the main difference being that he absorbed the life force of others rather than consuming blood.

Morbius has appeared in several Marvel video games, including as a supporting character in 1993’s Maximum Carnage (based on the comic book storyline of the same name) and certain versions of 2007’s Spider-Man 3. He’s also appeared as a playable character in Marvel: Avengers Alliance, LEGO Marvel Super Heroes 2 and Marvel Super Hero Squad Online.

Morbius has yet to appear in live-action form, though there have been rumors of a Morbius movie for most of the last two decades. At one point the character was considered for the lead villain role in 2002’s Blade II. In fact, an alternate version of the ending for the first movie features a masked character who was intended to be revealed as Morbius.

Instead, the character will make his film debut in Sony’s upcoming Morbius movie. Jared Leto has been cast as Dr. Michael Morbius, with Daniel Espinosa directing and Matt Sazama and Burk Sharpless penning the screenplay. The movie is presumably set in the same shared universe as 2018’s Venom and its 2020 sequel. Thanks to the first Morbius trailer and a cameo appearance from Michael Keaton’s Adrian Toomes, it appears all these movies are now taking place within the Marvel Cinematic Universe (albeit their own, private little corner). We’ll no doubt learn more about Morbius and Venom’s connection to the wider MCU when the film hits theaters in July 2020.

For now, check out our exclusive interview with Leto for his thoughts on this iconic Marvel anti-hero.

Jesse is a mild-mannered staff writer for IGN. Allow him to lend a machete to your intellectual thicket by following @jschedeen on Twitter, or Kicksplode on MyIGN.