When finding some living creatures in fruits or vegetables purchased at the grocery store, most people would probably just ask for a refund.

But British media personality, Sam Darlaston, had some other plans for the caterpillars he has found inside the broccoli he bought from a local Tesco store.

After overcoming the first shock, he realized he had a new pet to enjoy during the lockdown.

So, he decided to raise those caterpillars into butterflies and documented the whole process in an awesome twitter thread.

In case anyone is interested, the name we’ve gone with is Cedric, he’s from Spain (at least we assume so because the broccoli is) and he dances after eating spinach and broc all day long 🐛🐛🐛 pic.twitter.com/tO1EyMgeG1

WELL! What do you know! My housemate just went to cook his broccoli and BAMMMMMMM, he’s got green mates too. Open to name suggestions for our 7th caterpillar child 😭🐛🐛🐛 pic.twitter.com/Gs02yjtPLr

Day 3, and we’ve got our first caterpillar romance story. Janine and Slim Eric nap together, eat together, and occasionally dance together 🐛 pic.twitter.com/t883KOVgi0

WE’VE GOT AN ESCAPOLOGIST – this rebel has grabbed some vanilla sticks!! tesco you can pay for me to get a new set of vanilla sticks now, they’re fackin frazzled pic.twitter.com/tMI5YHaylR

BIG SCENES!!! £1.10 for 3 broccolis full of caterpillars – up it to £50k Tesco or am going to sell my story to Take A Break magazine pic.twitter.com/MXEKDYv319

Honestly Tesco, look how much Janine the caterpillar EATS!? I think you need to provide more 55p broccoli gift cards for her pic.twitter.com/sruvjcMtkO

Croc needs to learn not to play with his food tbh 🐛🐛🐛 pic.twitter.com/9dqPyRUcxK

Final update of the day… we’ve now got 3 cocoon / chrysalis, they grow up so fast 😭🐛 pic.twitter.com/AZIJMvOYnI

I then got him to pose for a picture with his brother Olly so we could see the diff between caterpillar and cocoon. 🌚🌝 pic.twitter.com/xEcQ9kRdhJ

3/7 of the Tesco broccoli caterpillars are now wild butterflies 😭, this morning Janine joined Cedric and Slim Eric for her new life ✌️🥦🦋 (thought she’d at least say bye but she just bolted) pic.twitter.com/ZxggmWc6VP

AN HONOUR to be on @BBCRadio2 with the legend @theJeremyVine discussing my caterpillars and releasing Broc and Olly live on air 🥦🐛 this is it, life’s peaked really pic.twitter.com/KLFp1rDg1d 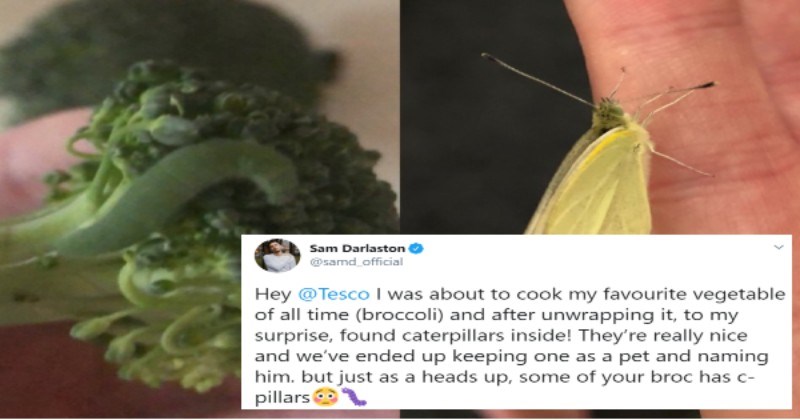 2020-06-29
Previous Post: TikToker says her Tourette’s is making her shout out ‘F*ck 12’ and ‘ACAB’
Next Post: It looks like the scheduled toppling of the Emancipation Monument won’t go ahead as planned