Get Ready! Taylor Swift’s Netflix Documentary Will Show HER Side Of The Kimye Feud!

Anyone expecting this new Taylor Swift documentary to be just another concert film with some behind the scenes moments of quick costume changes and rushing backup dancers is in for a rude awakening.

According to Tay’s revelatory Variety cover profile, Taylor Swift Miss Americana is a gradual examination of how the pop star found her political voice, or as the trade rag so dramatically puts it, it’s “a portrait of the birth of an activist.” Wow.

You’d expect then, the film — which scored a prestige premiere spot on Thursday, January 23 at the Sundance Film Festival — to focus on the political issues Taylor has found herself fighting for, and how they shaped her personally. You know, LGBT equality and women’s rights.

But don’t expect a PBS political doc. This movie sounds like it’s going to deliver the goods in the way of HOT. CELEB. GOSSIP.

See, one of the most important steps on the journey to Taylor speaking out for what she believes comes from an episode in which she followed her old pattern of people-pleasing — and it blew up in her face in a way few things ever had.

We are of course talking about the incident in 2016 when Taylor publicly took offense at Kanye West‘s song Famous, in which he rapped the lines:

“Me and Taylor might still have sex / Why? I made that bitch famous”

Her outrage was answered immediately by Kim Kardashian West releasing secretly recorded audio of a phone call between the two artists in which Taylor gives Kanye the green light to one of the lyrics. The whole thing made Taylor look like a huge phony, selling feminism as a brand. But in this documentary, we are shown all of those events from her side of the story!

The Style singer hasn’t spoken much about the incident, basically NEVER talking about Kanye in public, but she did open up a bit about the experience last year. In a candid Rolling Stone interview, she explained she was trying to be magnanimous to the rapper after their earlier animosity — but he was using her desire for peace in order to ambush her later!

She claims he only shared some of the lyrics and surprised her with the most offensive stuff, and that wasn’t the first time he was “two-faced”. She revealed he’d pulled a similar stunt on her at the 2015 VMAs, personally asking her to present his award and then going on TV complaining about how MTV had chosen her. 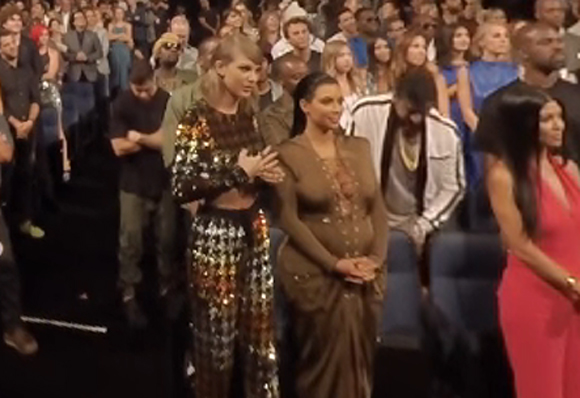 You can actually see the moment Taylor realizes what Kanye has done and takes her arm from around Kim in the 360 VR. / (c) MTV/YouTube

It’s all so much duplicitous drama, and we are SO HERE FOR SEEING IT ON THE BIG SCREEN!

What does it have to do with the movie’s political journey though? Director Lana Wilson tells Variety it was her call and not Taylor’s — when she realized how much of a role Kanye has had in shutting Taylor down over the years:

“With the 2009 VMAs, it surprised me that when she talked about how the whole crowd was booing, she thought that they were booing her, and how devastating that was. That was something I hadn’t thought about or heard before, and made it much more relatable and understandable to anyone.”

Tay recalls to the outlet herself how that infamous 2009 moment affected her mental health for years:

“As a teenager who had only been in country music, attending my very first pop awards show, somebody stood up and sent me the message: ‘You are not respected here. You shouldn’t be here on this stage.’ That message was received, and it burrowed into my psyche more than anyone knew.” 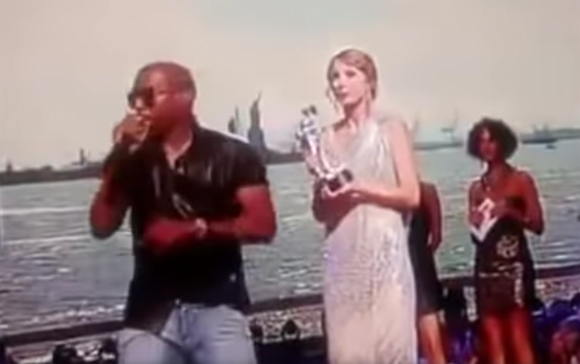 And that led directly to the 2015 incident:

“That can push you one of two ways: I could have just curled up and decided I’m never going to one of those events ever again, or it could make me work harder than anyone expects me to, and try things no one expected, and crave that respect — and hopefully one day get it. But then when that person who sparked all of those feelings comes back into your life, as he did in 2015, and I felt like I finally got that respect [from West], but then soon realized that for him it was about him creating some revisionist history where he was right all along, and it was correct, right and decent for him to get up and do that to a teenage girl. I understand why Lana put it in.”

It’s not about the issues on which Taylor takes a strong moral stance. It’s about a woman learning to not let herself be shut down and silenced because she’s worried about what people think of her. Some things ARE worth fussing over!

As we said, we are SO stoked for this doc now! We’ll have to wait for the Netflix premiere later this month on January 31, then you can be sure we’ll be talking all about any revelations from the film itself.

The post Get Ready! Taylor Swift’s Netflix Documentary Will Show HER Side Of The Kimye Feud! appeared first on Perez Hilton.

2020-01-22
Previous Post: Area Expert™ Tom Nichols forced to shift his goalposts after Richmond gun rights rally fails to result in the bloodshed he was hoping for
Next Post: ‘De-escalated what?!’ Katie Pavlich reminds Gov. Ralph Northam there were no incidents at #VirginiaRally