Rapper Bhad Bhabie is sick and tired of how Instagram is making her feel — and she’s ready to do something about it.

The 16-year-old artist, born Danielle Bregoli and originally infamous for her “Cash Me Outside” tussle with Dr. Phil, announced she’d be leaving the social media app for a while to benefit her “mental health.” When she comes back, she further announced in a since-deleted series of IG posts, she would be turning off her comments so as to no longer deal with trolls and cruel people. Not a bad idea, honestly!

Writing out her feelings in that since-wiped post on the social media platform, the teenage rapper and artist revealed to her fans and followers (below):

“Due to my mental health I will be taking a small break from this app. I hate to say it but y’all won! Congrats mission complete. Y’all made the lil 16 year old completely loose [sic] it! Social media has not only made me who I am but also is every reason I can’t sleep at night. Imagine being called a racist white c**t every second of they [sic] day… I show off a tattoo they say I’m tryna b black… I defend myself then boom I’m labeled a racist. There’s no winning as a celebrity on this app.”

Wow… Who knew Bhad Bhabie was going to make so much sense??? She’s exactly right about the abuse and vitriol that gets thrown around on IG, and across social media in general!

And she didn’t stop there, either; the teenage girl added more in a two-part message — both parts of which you can see in full (below): 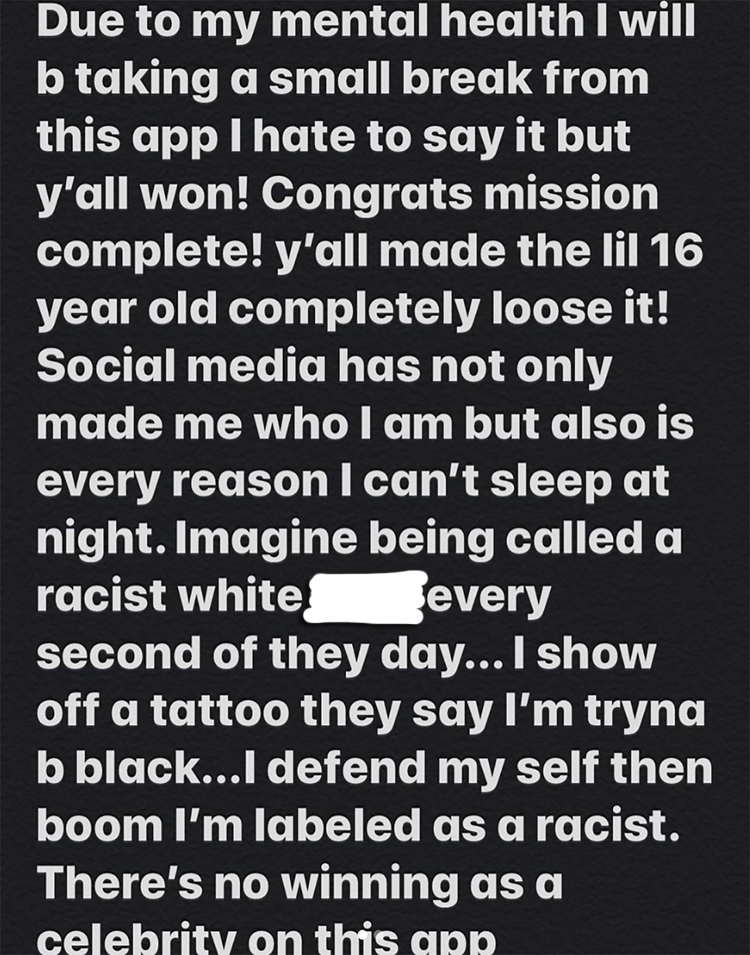 Part one of a two-part message Bregoli fired off to her IG followers. / (c) Bhad Bhabie/Instagram

Related: Bhad Bhabie Gets Beat Up By Her Nemesis! Whoa!

And she continued from there: 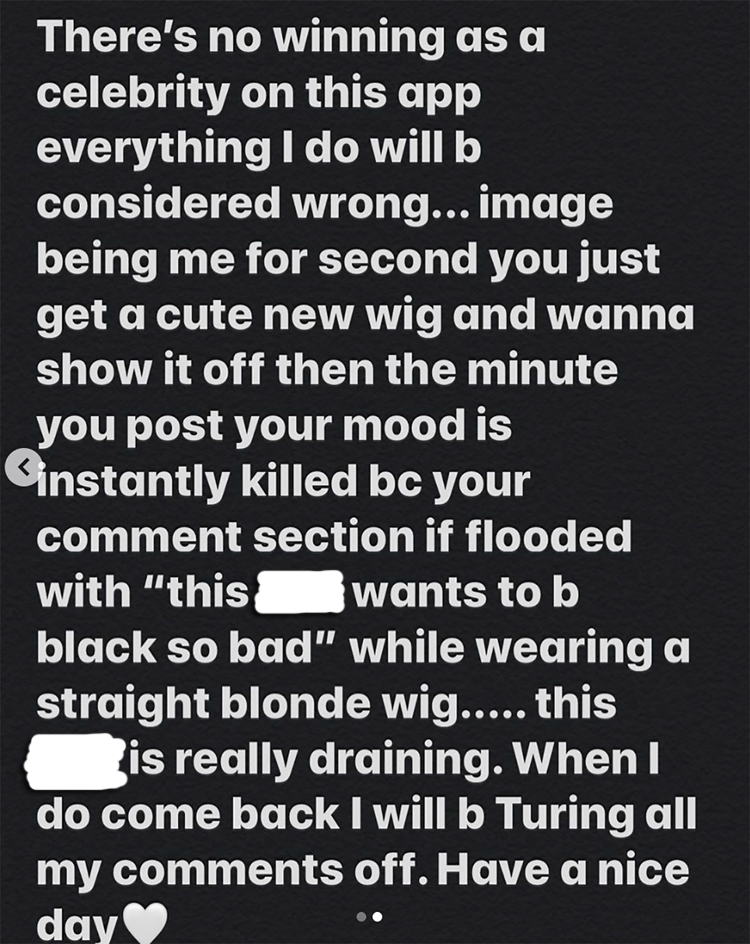 This girl is out here speaking the truth on this matter, at least! / (c) Bhad Bhabie/Instagram

Can’t even imagine going through this hate at 16…

“Everything I do will b considered wrong,” the embattled artist continued in her message to fans and followers. She then wrapped things up, adding (below):

“Image [sic] being me for a second you just get a cute new wig and wanna show it off then the minute you post your mood is instantly killed bc your comment section if [sic] flooded with ‘this s**t wants to be black so bad’ while wearing a straight blonde wig… this s**t is really draining. When I do come back I will b Turing [sic] all my comments off. Have a nice day.”

Social media can be a remarkably cruel and dangerous place, and it’s no surprise people are experiencing mental health issues like anxiety and depression when having to deal with tough and unwelcoming situations on line. Something needs to change!

Here’s to Bregoli getting right and taking a nice, restful break from social media. And here’s to her turning off the comments when she does return! The cleaner, the simpler, the better, we say!

Reactions, Perezcious readers?? Share with us what you think here in the comments (below)…

2020-01-17
Previous Post: Since Project Veritas video dropped, it looks like all of Bernie’s Iowa state directors have locked down their accounts
Next Post: ‘Pieces of history’: Reporters pretty taken by the many pens Nancy Pelosi will use to sign articles of impeachment